Lockwood Fire District #8 (LRFD) was formed in 1988 and is located at 501 Johnson Lane, Billings and responds to over 700 emergency incidents per year. 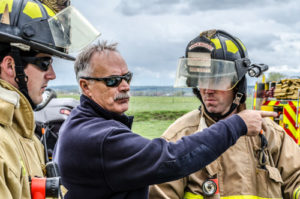 Due to commercial and residential growth, LRFD has continued to see expansion within the community.  The new high school that is being built in Lockwood is also expected to increase growth within the community over the next several years.  An additional highway interchange that will connect Lockwood to the City of Billings, along with a sewer expansion will also be beneficial to the Lockwood community.  The district currently has over 9,000 permanent residents along with several thousands of people who commute and work within the district.

The Fire Department is a special district and is a political subdivision of Yellowstone County.  It is a tax-based fire district, that is governed by five Board of Trustees who meet on a monthly basis.

The fire district is bordered by scenic cliffs to the west.  The Yellowstone River serves as a natural border between the City of Billings and Lockwood to the north.  The Crow Indian reservation borders the southern district and seemingly infinite grasslands spread past the eastern borders.

The LRFD response area is comprised of over 80 square miles of coverage with an anticipated increase of 30,000 acres of wildland fire protection as contracted with Yellowstone County (effective July 1, 2009).  This also includes a major railway that serves several industrial sites along with several miles of I-90 and I-94 being located within the Lockwood Fire protection area.  The LRFD protects over 235 commercial properties and 3,100 residential properties, many of these residents are located with significant wildland-urban interface (WUI) fire areas. 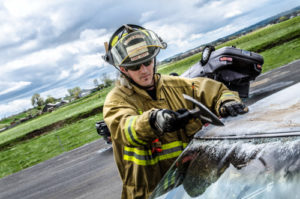 The Fire District provides fire protection to include, but not limited to, schools, infrastructure, industrial sites, vehicle and any other fire suppression operations that may present itself.

In addition, LRFD provides hazardous materials response to include mitigation and incident management.  The LRFD has two full sets of vehicle rescue/extrication equipment, active fire inspection/fire prevention education programs and other fire/rescue related services.  The LRFD has adopted the International Fire Code (IFC) and maintains an aggressive fire inspection program in an effort to protect lives and property.  The LRFD currently operates out of one fire station, located

The Fire District is considered a career/combination fire department.  The district currently employs 14 full-time career firefighters to include the chief and two administrative assistants.  There is a minimum staffing requirement of three people per shift which includes one Firefighter, one Driver Operator and one Captain.  All firefighters to include the chief, are required to be Emergency Medical Technicians.

All firefighters have EMT certification levels that vary from EMT-Basic, EMT-Intermediate to EMT-Paramedic. The Lockwood Fire District is a career department that offers a reserve program to those wanting to learn the profession.  The LRFD is proud of the active reserve firefighter program and strives to maintain at least 15 reserve, on-call firefighters.  The reserves are required to work shifts with career staff and are subject to call in for major incidents.  Lockwood Fire District is the only fire based, paramedic level (ALS) transport ambulance in the county. We provide ALS ambulance transport with two ALS equipped ambulances. 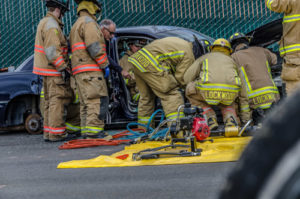 vehicle and one emergency response trailer. The District protects areas serviced with a municipal water system established and maintained by the Lockwood Water and Sewer District.  In addition, the LRFD protects areas within the district where there are not fire hydrants and therefore, must have apparatus to carry water to the fire area. The district and several residents maintain “dry hydrant fill sites” or underground water tanks with capacities of up to 10,000 gallons of water that can be used for water supply during fire suppression operations.

The LRFD has a close working relationship with the City of Billings Fire Department, all Yellowstone County fire departments, American Medical Response, Exxon-Mobil and the Exxon-Mobile Fire Brigade.  The LRFD is a partner in the Southern Zone Fire Council which consists of seven counties to include Yellowstone, Stillwater, Treasure, Big Horn, Carbon, Musselshell and Sweet Grass.  These strong partnerships enhance emergency services delivery to all of the involved communities.